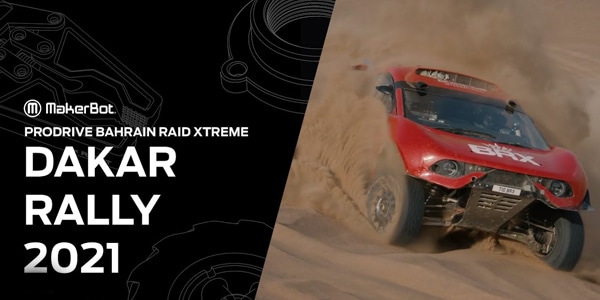 MakerBot’s customer, Prodrive and the Kingdom of Bahrain partnered to build a brand new racing team, Bahrain Raid Extreme (BRX), to compete in the Dakar Rally 2021. BRX used two METHOD X 3D printers starting in their workshop in the UK, and then transported the 3D printers to the desert.

Using 3D printers to produce parts for automobiles is not a new use case, however, the difference here is that BRX took the 3D printer with them to the desert and produced parts during the race itself. The Dakar Rally, in particular, is one of the most extreme races that takes place worldwide. Vehicles are subjected to incredible stresses over unfamiliar terrain for days. This can quickly expose problems in design that could now be re-designed on the fly.

The METHOD X was installed in a special trailer that accompanied the cars to the rally. The trailer provided power (and sand protection) to the METHOD X, as well as housing all the other parts and repair capabilities.

MakerBot’s METHOD X can produce accurate 3D printed parts using strong engineering materials. In particular, their carbon-fibre nylon material is sufficiently strong and heat resistant to be used in place of metal parts in many applications.

For on-car parts, the METHOD X 3D printers utilized MakerBot Nylon Carbon Fibre, giving them the advantage of quick deployment without sacrificing dimensional accuracy or part strength. The presence of a 3D printer on site allowed them to quickly replace broken parts, or at least the 30 or so that were 3D printed.

They not only could replace parts, but they were also using this capability to change the design of some parts during the rally. They could conceive of a change and commence printing only an hour later. This adds quite a bit of flexibility for a team that’s otherwise in quite a remote situation.

If you want to talk to the team about MakerBot Method, drop us an email on Prajakta.patil@jackys.com for more personalised discussions.