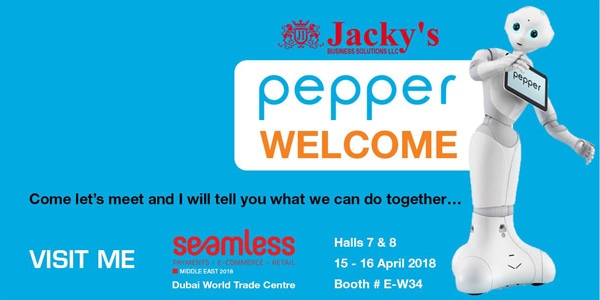 Pepper, the humanoid robot developed by Softbank Robotics, turned 6 earlier this month. Jacky’s brought Pepper to the Middle East officially two years ago at Seamless Middle East in Dubai. He has since proven to be popular, versatile and been used in several government, retail and customer service institutions.

Pepper is able to identify visitors with the use of facial recognition, send alerts for meeting organisers and arrange for drinks to be made. Pepper can chat autonomously to prospective clients.

The first functioning Pepper receptionist in the UK was supplied by a SoftBank distributor and was installed in London at Brainlabs. The robot has also been used at banks and medical facilities in Japan, using applications created by Seikatsu Kakumei and it is also used in all branches of Hamazushi restaurants in Japan. Pepper is used in North American airports such as Pierre Elliott Trudeau International Airport in Montreal, Canada. The robot is used to greet travellers, offer menus and recommendations.

Jacky’s launched a Robot Content Management system at Gitex Technology Week last year, which  has made it easier to adapt Pepper (and Nao) for your needs. If you want more information around this, please feel free to get in touch with one of our representatives or email vms.sales@jackys.com.