Softbank Robotics Europe reverts to its former name of Aldebaran

Softbank Robotics Europe reverts to its former name of Aldebaran 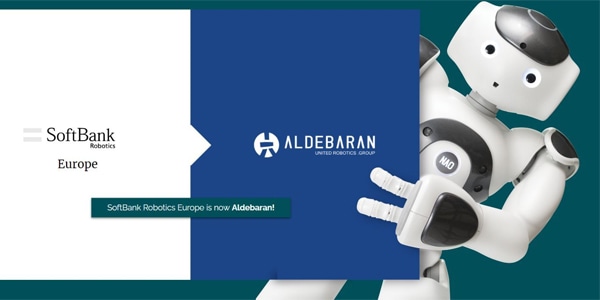 SoftBank Robotics Europe will now operate under its original name, Aldebaran, the creator and manufacturer of NAO robot in 2006 and Pepper with SoftBank in 2012.

With the acquisition by United Robotics Group (URG), the company is now building towards becoming a European leader in service robotics companies. URG is a group of eight European robotics companies united in one group with an ecosystem of 300+ highly qualified technology-inspired people, driven by a shared set of human values, always focusing on customer needs, product quality, data privacy and sustainability.

The main goal of URG is to develop a new generation of robots, combining the best of both worlds, human interaction social robots and skillful industrial robots, CobiotX - Robots For Humans. It will also continue to improve its offerings for existing products such as Pepper & NAO.

Jacky’s Business Solutions will continue to work with Aldebaran and support their ongoing developments in humanoid robots Pepper and Nao, across the GCC.

If you want to explore robotic solutions for your organisation, reach out to our team on vms.sales@jackys.com to set up a meeting.

What was the purpose of the NAO robot created by SoftBank Robotics?

NAO robot is the first robot created by Aldebaran. This humanoid robot was created specially for education and research.

For what is NAO Robot best known for ?"

NAO is best known as the “Educational robot”. NAO robot is the best tool for education and research. Nao can be used in the training of the children with Autism.