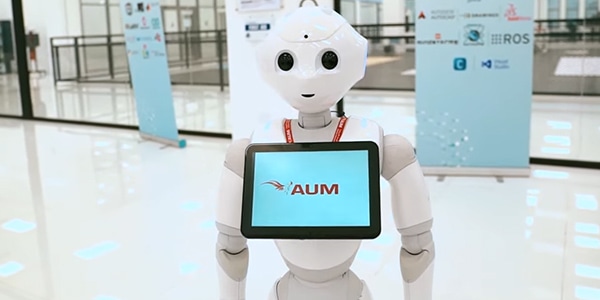 The American University of the Middle East (AUM) in Kuwait has incorporated Softbank Robotics’ humanoid robot, Pepper, into their robotics centre.

AUM has recently invested in no-code Content Management System (CMS) for the purpose of rapid development of robotic experiences. The plan is to use pepper for several activities around the campus including orientation of new students, being able to share FAQs for new admissions requirements as well as enabling students to rapidly develop projects for cross pollinating and creating differentiated user experiences among different industries in Kuwait.

In a special video released recently, Ayat Al Serify, a Computer Science Engineer from AUM, showcased the capabilities of what Pepper can do and conducted a live demonstration of its capabilities.

Pepper recently also starred in an AUM-themed Arabic music video where he was featured with Bader Al Shuaibi, a well-known Arabic Singer.

If you are looking to know more about Pepper or any of the other robots, please reach out to the team on 04-3388900 or email at vms.sales@jackys.com